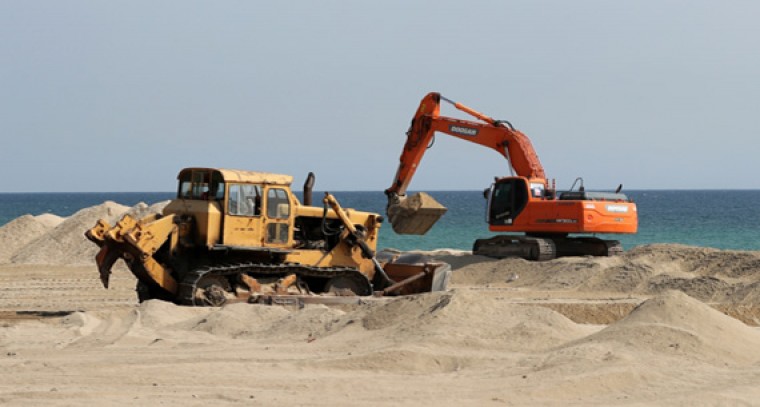 The severe shortage of sand in Andhra Pradesh has hit the construction activity in the state leading to suicide of five workers this month and pushing lakhs of workers into misery.

The issue came into sharp focus on Monday when a selfie video taken by a worker before committing suicide went viral.

Polepalli Venkatesh, a plumber, said he was committing suicide as he was unable to find work for four months. Unable to deal with the financial hardship and to provide treatment to his ailing son, he hanged himself at his house in Guntur district a few days ago.

The spate of suicides led to an outcry from the opposition parties, which blamed YSR Congress Party (YSRCP) government's wrong policies for the crisis. The ruling party denied the allegations and hit back at the opposition for carrying out a false propaganda.

The suicides, all reported from areas in and around state capital region Amaravati, are linked to the slump in construction activity in the state due to scarcity of sand following a change in the sand policy after YSRCP came to power in May.

The new government initially banned sand mining, which created severe shortage and skyrocketing of the price.

The new government scrapped the earlier "free sand policy", under which the cess on sand was waived and the consumers had to pay only transportation charges.

Promising to provide sand at low cost from government-owned stockyards, the Jagan government introduced a new policy on September 5.

Under this policy, state-owned AP Mineral Development Corporation (APMDC) Ltd will undertake sand quarrying and supply sand to the customers on behalf of the government at the stockyards set up across the state. The consumers were asked to book the sand online and it was also announced that the movement of trucks will be tracked to prevent black marketing, hoarding and artificial supply shortage.

However, ever since the new policy came into effect, the authorities could not make more than 40,000 tonnes of sand available on any given day while the daily demand is around 1.50 lakh tonnes.

People complained that the stocks made available online are getting exhausted in no time. There have been allegations that the sand is being diverted from stockyards to cities like Bengaluru, Chennai and Hyderabad and being sold for Rs 80,000 to Rs 1 lakh per truck.

The prices of sand within Andhra Pradesh have skyrocketed, badly affecting the construction sector. The construction activity in and around Amaravati and other parts of the state came to a halt, throwing lakhs of labourers out of work.

A tipper truck of sand from APMDC stockyard in Visakhapatnam costs Rs 20,000 but due to severe shortage, builders are sourcing sand from neighbouring Odisha at a cost of Rs 45,000.

APMDC officials have been assuring people for the last two months that things will be soon under control. They said they were not able to quarry sand from Godavari, Krishna, Vamsadhara, Nagavali and Tungabhadra rivers due to floods. The water levels have still not receded, affecting the sand quarrying.

The opposition parties slammed the government for pushing lakhs of construction workers into depression.

Blaming the government for the shortage, leader of opposition Chandrababu Naidu demanded that the government should provide financial assistance to the workers who were rendered jobless because of its faulty policies. "This is a man-made shortage," he said.

"I appeal to the centre to come to the rescue of construction workers. The AP government's chaotic sand policy has put lakhs of workers out of job and put their families in a state of misery," said Pawan Kalyan.